“No one can whistle a symphony. It takes a whole orchestra to play it.

… and we do take immense pride in our team who help us play the tune to its perfection!

We have a team of Mentors who with their impeccable knowledge and experience have been guiding us. Each mentor have been instrumental in carefully crafting the road ahead for the nascent organisation. They stand tall, helping us with their insight. The details of each mentor can be read by clicking on their image below.

Besides Mentors, we have our team of “brainboxes” who further work to help achieve our objectives.

Mentor
An enthusiast to the core, Mr. M.P.Jain is a well known name in the welding industry. Superannuated as Executive Director EIL in Feb 2019, where he started his career as a Welding/ NDT Engineer, Mr. Jain has worked on several mega projects. Some of them include Kochi Refinery, GAIL, Bharat Petroleum and Bombay High Projects of ONGC. Having spent all his career in Oil & Gas industry where welding is one of the most critical process, he is rightly heading the Indian Welding Society as the Chairman of the North Zone. This BITS Pilani Alumnus has also worked in Project Management, Quality Management, HSE Management and Company Management and has several  overseas experience including South Korea, Philippines and Sudan. He is also a member of Quality Excellence Working Group as well as Safety Management working group of FICCI and is a qualified Lead Auditor for ISO9001, OHSAS18001 and ISO14001. Besides imparting knowledge of welding, one interesting aspect of Mr. Jain is his love for running marathons! This avid runner has shown with his grit and determination that age is just a number to run even 25kms! And under the mentorship of this awesome combination of knowledge and discipline, IndiaWelds is sure to soar high!

Mr. Tribikram Mohapatra is an aerospace professional having more than 40 years of experience in HAL in the manufacturing of Aircraft , UAVs, Space Launch Vehicles, Sattelites and Missiles. He has to his credit major projects like Space Project for Manufacturing of PSLV, GSLV MK-II and MK-III, INSAT and IRS satellites of ISRO and Prithvi Missiles for DRDO at HAL, Indigenous manufacturing of Hawk AJT, Pilotless Target Aircraft project, Jaguar Strike and Trainer Aircraft projects among others.

Jaspal Singh is a quality and welding professional with more than 16 years of experience. He has a strong background in Manufacturing Processes, Project Management, Lean Manufacturing and Digital Factory Implementation Programs. He has a hands on experience in  various sectors from Aviation, Transportation, Oil & Gas and Automotive.

At IndiaWelds he is an asset who brings his immense knowledge and ideas that will for sure help IndiaWelds in its endeavour.

Prof. J. Ghosh Roy is a well known name in the welding fraternity. This M.Tech form IIT-D specialises in Industrial Tribology and also has been working on GMAW with Cold Metal Transfer.

He has more than two decades of teaching experience in Directorate of Training and Tech. Education, Delhi. He has also been actively involved in designing few innovative gadgets that even won prizes at national level competitions.

Besides, this enthusiastic reader is also a NSDC Certified Assessor on behalf of IIW. He has been actively involved in assessments across the country for quite some time now.

At IndiaWelds, he brings his insight, knowledge and experience for an active interaction between the industry and academia.

Mr. Som Ashutosh is someone who can juggle between his roles in academia and industry with ease.

Presently the AGM, Quality Assessment and Accreditations at AKGEC Skills Foundation in the domain of Industrial Automation, Robotics, Manufacturing & Fabrication, he has more than 15 years of teaching experience.

This ME in Production Engineering from Delhi College of Engineering, was an Associate Professor in the Mechanical Engineering Department of Indraprastha Engg. College, Ghaziabad.

An IWE from International Institute of Welding, he has more than 22 papers to his credit in various Journals and National and International Conferences. Besides, he has authored a book titled “Advance Welding Technology”.

His experience in Skill Training and Certification in the field of Welding Technology and Engineering is definitely an asset to realize the vision of IndiaWelds. 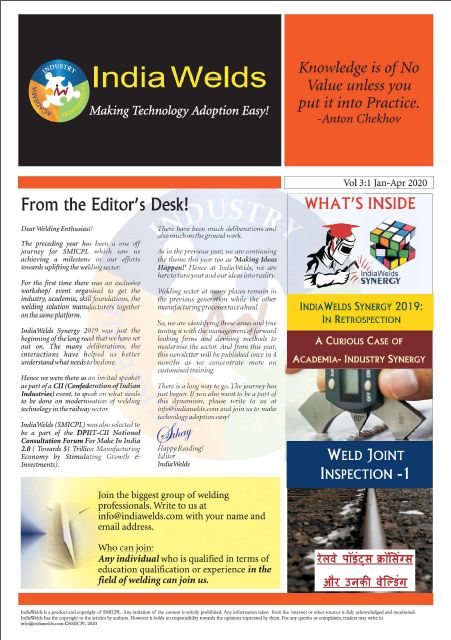